Obviously I checked out a few upcoming titles at E3 (playing demos of some of them, looking at trailers and gameplay for others); here are a couple of the highlights.

Star Wars: the Old Republic
This one I was really looking forward to and I waited in line for about 3 hours for the 10 minute video and 15 minute playable demo. I played a Sith Inquisitor Assassin (I was more interested in the Sorceror spec but that was already taken) and honestly, it felt like playing a magicky sort of rogue in WoW. I am disappoint; the game feels very much like WoW with a Star Wars skin, and as I’ve said before, I’d rather be playing a Mass Effect MMO, so if it’s gonna be WoW with an SF skin, it should be Mass Effect. Maybe the story and content will make up for my disappointment with the gameplay, but we’ll see. For now, though, I agree with this guy.

END_OF_DOCUMENT_TOKEN_TO_BE_REPLACED

I’ve had my breakfast and my coffee and my shower, so I guess it’s time to get my E3 wrap-up under way.

We didn’t go for the full day because we had a long drive ahead of us. Probably a good thing we left early anyway, as I heard there was some sort of bomb threat or something (but I can’t find any news about it now so I don’t know – just something one of my travel companions reported to me as we were driving up I5 heading back to the Bay Area).

I will do more of a write-up on my thoughts and impressions on the various sights when I’m feeling less tired/more coherent but for now you get picspam.

END_OF_DOCUMENT_TOKEN_TO_BE_REPLACED

Day 2 ended up being a short day. We decided to drive because we were thinking of staying after for the WIGI Mixer, but left kinda late so had trouble finding parking. Very frustrating. After waiting in line for a couple hours at the Capcom booth, I had the beginnings of a migraine so I headed back to my hotel early. But I did pick up a bit of swag.

END_OF_DOCUMENT_TOKEN_TO_BE_REPLACED

I have a pic of the badge holder that should go here but for some reason it’s failing to upload. I’ll try again tomorrow.

Checked into our hotel

And I’m totally geeking out over my room key. 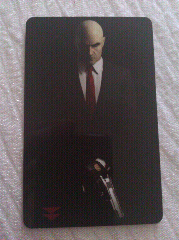 I’m going to E3 next week for the first time. I’m pretty excited about it, though I’m not really sure what to expect. Obviously I’m looking forward to learning about the new Nintendo console. There’s apparently going to be some new stuff on Star Wars: the Old Republic, which is a game that I’m pretty excited about (though I do think a Mass Effect MMO would be far more exciting). Also CD Projekt Red (Polish developer of Witcher, a dark RPG I quite enjoyed though sadly never finished) is going to be announcing a new project, which should be interesting. And then there’s Bioshock Infinite.

Other than that I’m not sure what to be looking at/looking out for. If you want to, take a look at this exhibitor list and let me know if there’s anything you think I should check out. Maybe I’ll take my laptop with me and try to do some posts in the evenings, but I’m not going to be approaching this as a blogger primarily – this is as much about work and making connections (that dreaded “networking” thing) as it is anything else.